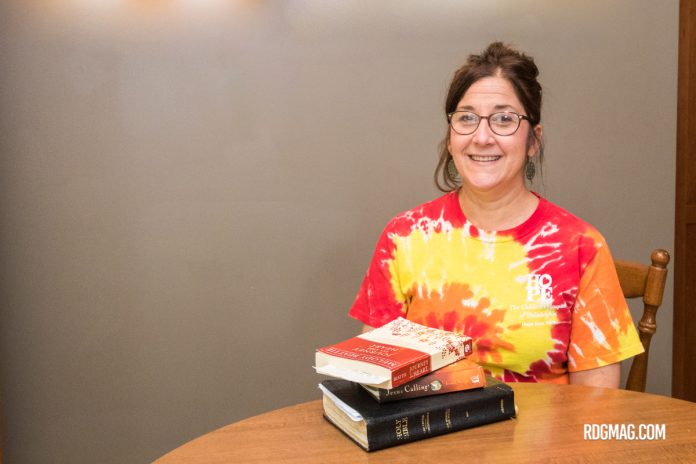 About twenty years ago while she was driving to the hospital to visit a family member, Jeannie Motze noticed a man standing under the bridge that crosses over Reading’s Lancaster Avenue. He was holding up a cardboard sign. She put on her blinkers, rolled down her window and stopped to ask him if he was hungry. He said yes, and she handed him the brown-bagged lunches that she had packed for the trip and then continued driving onward.

If you’re Jeannie Motze, that’s just the kind of thing that you do: you see someone who might need some extra love, you stop and talk to them, and if at all possible, you feed them.

For nearly the past two decades Jeannie, along with her husband Mike, has served in the crucial but often-unrecognized role that many of our community members play – as a caregiver to an ill family member.

“Your whole world stops when your sick family member goes into the hospital. You can sit outside the hospital and look around while you’re praying and there you are while everyone else’ life goes on…No, I never thought about what it’s like [to be a caregiver]. You just do it. Insurance changes…you need tests…you just do it. The hardest part is that you have to watch someone you love be sick and that it splits up your family away from each other.”

She recalls that although she technically worked two part time jobs, as a restaurant server and in food service at a local high school, juggling medical appointments across multiple specialists and navigating the health care system made it really more like three.

“You have to stay on top of things. You can’t think that just because you have insurance it’s all covered; you have to constantly be on top of things to double check. And when I couldn’t get the answers, I’d reach out to healthcare professionals for help.”

She feels thankful for the support of many community members, ranging from school district staff to church members, and for the medical professionals at Children’s Hospital of Philadelphia with whom she has partnered—some for almost twenty years.

“It has been over 18 years that I have personally known [Jeannie.] She has been such a strong advocate and devoted mother to her son through the years, both in giving one of her kidneys to him, supporting him through [it all.]… It is not an understatement that I wish more “transplant mothers” were more like her,” said Jo Ann Palmer, MSN, CRNP, Renal Transplant Coordinator, Division of Nephrology, at The Children’s Hospital of Philadelphia.

Amidst it all, Jeannie still made an effort to give back to medical community. Once she served as a parent liaison in an educational seminar for nurses. Another time she volunteered to be the live ‘case-study’ for two graduate students who shadowed her family through the medical system for two years, “I hope that those nurses and the medical students who followed us learned something that they can use to help other parents and patients,” she said.

Jeannie remembers the first time someone asked her to volunteer, about twenty-five years ago, “I remember asking God to use me wherever I could be of use, and then they called me up the next day to teach Sunday School! I said no…but ended up doing it anyway.”

She’s been volunteering with a variety of youth programming ever since.

One of her favorite memories was serving as a “Table Parent” at a church-based weekly community dinner, where she ate dinner, played games and built relationships with a group of kids over the school year. She saw the impact that the program made and, years later when she began attending a new church, started a family-style dinner there, too.

She’s volunteered as a camp counselor for both sleepover camps and day camps for many summers, and, volunteers with a local after-school program, working mainly with Millmont Elementary School students at an off-campus faith-based program, “Good News Club.”

“When I was little I lived in the trailer park and the Big Blue Bus used to come pick us up and took us to a church where they had a summer program. The things I learned there I embraced and became important to me. And I wanted to do that for someone else. …Ok, it was actually about cheeseburgers, too! They bribed you with cheeseburger. [My family] didn’t have a lot and I wanted that cheeseburger…But I loved it. I was a part of something.”

It Takes A Village: “Lunch Lady” and Community Member

Jeannie noticed a student not eating lunch, day after day. She mentioned it to the appropriate staff person, who worked to get the student signed up for the school lunch program. After that, she saw that the student began eating lunch. “One of his friends guessed that it was one of us [in the cafeteria] who got his friend hooked up. He came up one day and thanked us for taking care of his friend,” she recalled with tears in her eyes.

Jeannie has noticed many students not eating lunch throughout her fifteen-plus years in the cafeteria and has frequently–quietly–used her own money to buy them lunch or to buy them an extra serving.

“There’s lot of reasons a student might not eat. Maybe their parents didn’t sign them up for the free and reduced lunch program. Or maybe they just forgot their money that day. Sometimes a kid is just extra hungry. It doesn’t matter to me. I don’t say, ‘Oh, well, that student spent their lunch money on cigarettes so I don’t care that they are hungry, I’m not going to be kind to this kid.’ It’s not my judgment call. It’s not my job to worry about how other people live their lives. I only worry about how I treat others.”

Outside of the cafeteria, as a long-time resident of the Mt. Penn/Antietam community and volunteer with the school district, Jeannie has gotten to know many local kids and is quick to offer a word of encouragement, or, of tough love.

“Just the other day I saw a group of kids I knew walking into the woods right near my house, and I expected they were about to be up to some mischief, so I made sure to call out a hello to them, to let them know I had an eye on them…Sometimes a kid just needs to know someone cares what they are doing, and to say something about it. You can still hold someone accountable and be kind to them.”

Warm Blankets, and the Future

“No matter where she is, Jeannie carries the same genuine heart and attitude towards the kids she’s working with. She sees someone isn’t eating, and she’ll go and try to do something about it. At Good News Club, she’ll notice if a kid is being a little disruptive and she’ll pay a little extra attention to that student, maybe go sit with them, try to gently calm them down, ask them questions and talk to them.”

Even though a major back injury caused Jeannie to recently permanently resign from her role in the cafeteria, and as a local server, she continues to find ways to show kindness to–and of course, to feed–others while she transitions into this new phase of her life. Although, she will still miss her cafeteria co-workers, “I worked with the most remarkable women you’re ever going to come across, because of their giving spirit. We had each other’s backs. I am sure I will never find exactly that ever again,” she said.

Jeannie recently completed training to volunteer at a local hospital, where she hopes to apply her own experiences to show kindness and empathy to others. She knows first-hand that being offered a reassuring smile, warm blanket or even a snack can make a big difference to a scared patient or family member.

My mom will be the first to remind you that she doesn’t have a college degree (and that she dropped out of high school, later earning her GED as a young mother) and she has never served on a Board nor been the recipient of a major award. That she was “just a waitress and lunch lady.”

In fact, she’s still not quite sure why she should even be featured in this magazine. Stopping to acknowledge the humanity, and perhaps hunger, of a person on the street, and in our own neighborhood; bravely sharing difficult life experiences so that others may learn from them; asking a child what they learned at school today and have they eaten lately — these are things that my mother has spent a lifetime doing. Humbly, often unnoticed, and not for recognition.

She can teach all of us that loving others without judgment, loving others without being tied to personal gain or promotion, and loving others in small and simple ways is often what has the biggest impact on our community. That’s certainly what she taught me.
—
Jeannie resides in Mt. Penn with her husband Mike, son Joseph, and rescued pit bull RuFus. She likes to go to Bible Study, eat out with friends, ride her bicycle and go to the beach to people watch.