In this episode of Life in Berks, Christopher Winters began running 5k’s to raise awareness for pediatric cancer in 2015. His inspiration for running was Laney Brown, a second grade student at Wyomissing Hills Elementary who was diagnosed with high risk AML with monosomy in May of 2013. By December of that year, support for Laney and her family gained national attention as 10,000+ people visited their West Reading house to show their concern and hope. Unfortunately, Laney lost her battle with cancer on December 25, 2013.

This struck Christopher to the core. Seeing how pediatric cancer affected families Christopher took it upon himself to make a difference. He began with running the Fashionista 5k which honored the late Laney Brown. He now races in every 5k he can to support cancer research. With his motto “Running for the Kids”, Christopher makes it a point to get to know the kids and families affected. Christopher isn’t alone, as the chief of staff to state representative Tom Caltagirone, he has a first hand look at how Pennsylvania manages funding for pediatric cancer research.

To continue his mission Christopher is running the Philadelphia Marathon to benefit the Emily Whitehead Foundation. To fundraise, Christopher hosted a Celebrity Bartender event night at Cheers, located inside the DoubleTree Hotel in Reading. Over 150 people came out to support the cause raising over $600 dollars in raffel money. To encourage donations Craig Poole, manager of the hotel donated several prizes including a one nights stay and dinner for two at the restaurant.

With a successful night Christopher will go on to run the Marathon on Sunday and we wish him the best of luck. 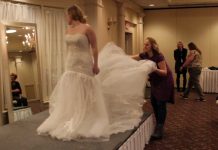 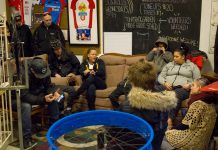