On the third Saturday of every month in City Park you’ll find volunteers representing local groups, from a church congregation to a motorcycle club, joining together to host a Stand Down, an event that serves local veterans and their families. At no cost to them, veterans and their families can receive hot meals, takeaway food, blankets, clothing, boots and even haircuts.

According to the National Coalition for Homeless Veterans, “The original Stand Down for homeless veterans was modeled after the Stand Down concept used during the Vietnam War to provide a safe retreat for units returning from combat operations.”

Robin “Cherokee” Gilmore, co-founder of Veterans Coalition of Pennsylvania, volunteered at the Philadelphia Stand Down events that were held yearly and wanted to bring a more frequent service to Berks County veterans, “I thought, maybe we could do better. Maybe it could be more than yearly. So we started what eventually became the monthly Stand Down here in Reading City Park.”

He and his partner and wife Sunny, and their team have been leading these Stand Downs every month for five years, rain or shine, and receive up to thirty volunteers on any given Saturday.

Many volunteers have made this a regular part of their month. Robin, a member of Bausman Memorial UCC church, heard about this event from her pastor and has been at the last fourteen Stand Downs, including during last year’s frigid winter months. She and her congregation collect snacks that she brings to distribute. “It’s very rewarding, I can tell you. I miss it in between months.”

According to Cherokee, Stand Down partners with local organizations, and the Berks County Veterans Affairs, for support and donations of food and other materials, “We’ve become super good at begging for stuff.”

Sunny and Cherokee founded the Veterans Coalition of Pennsylvania to serve as an umbrella organization that brings together various groups serving veterans, to act as the 501c3 that can accept charitable donations and to provide other functions, like carrying the insurance needed for these events. Cherokee said that he also wanted to found the organization to serve veterans on a daily basis, in between these monthly Stand Down events.

“It’s the most honorable thing I can think of to do…[It’s honorable] to serve today’s veterans and that’s what all these people you see here are doing…It’s the highest calling an American can have, serving today’s veterans.” 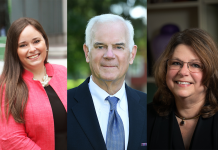 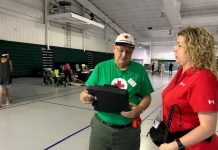 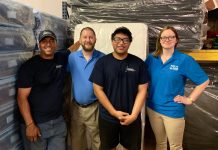