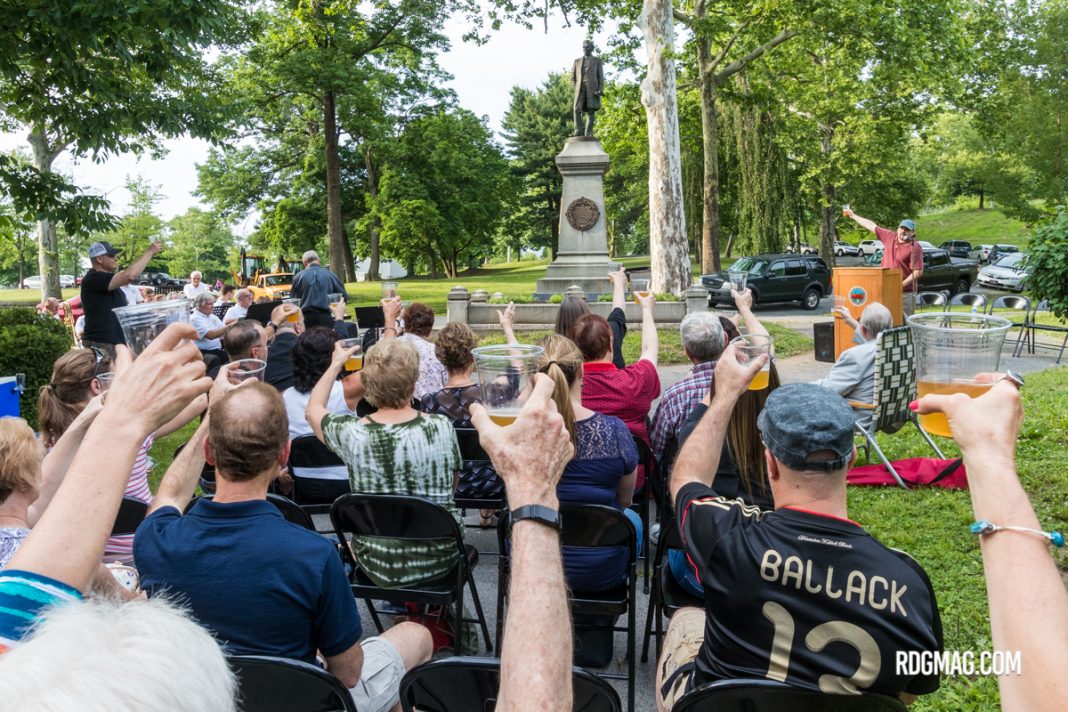 With a roar of the band local residents gathered at the City’s very first statue, the Frederick Lauer Monument, for a rededication ceremony in Reading’s City Park. The monument was originally dedicated in 1885 by the US Brewers Association to honor the work Fredrick Lauer did for the brewing industry and the City of Reading.

The re-dedication also included entertainment from the historic Ringgold Band. Fun fact, as one of America’s first community bands, the Ringgold Band played at the original dedication in 1885.

Reading City Council members also presented the Berks Brewers with a dedication certificate.  Reading City Council President, Jeffrey Waltman said “It is with great dignity and honor that the Council and the City of Reading presents this commendation to thank to Berks Brewers Guild and the Brewers of PA for working together to complete the restoration of the Frederick Lauer statue in Reading City Park. The Council recognizes both organizations for the commitment and dedication to the people of the City of Reading and its rich history of brewing that is resurgent in new and exciting ways.”.

Rewind a few years ago, the monument was vandalized and plaques stolen. The Brewers Association stepped in replace the plaques, donating $25,000. A lot has happened in 133 years. Over the past century the monument settled, slightly shifting from its original spot. To finish the restoration, five local breweries came together to raise the money needed to complete the project.

Born in Germany in 1810, Lauer immigrated to the United States at age 12. He learned the brewing process at an early age from his father. By age 16, he was foreman for his family’s brewery, and at 25, he became the brewery’s proprietor. For decades to follow, through innovation, hard work and business savvy, Lauer established himself as a brewing pioneer not only locally, but throughout the country. Lauer is considered by many to be one of the early driving forces in establishing what would eventually become modern day brewing.