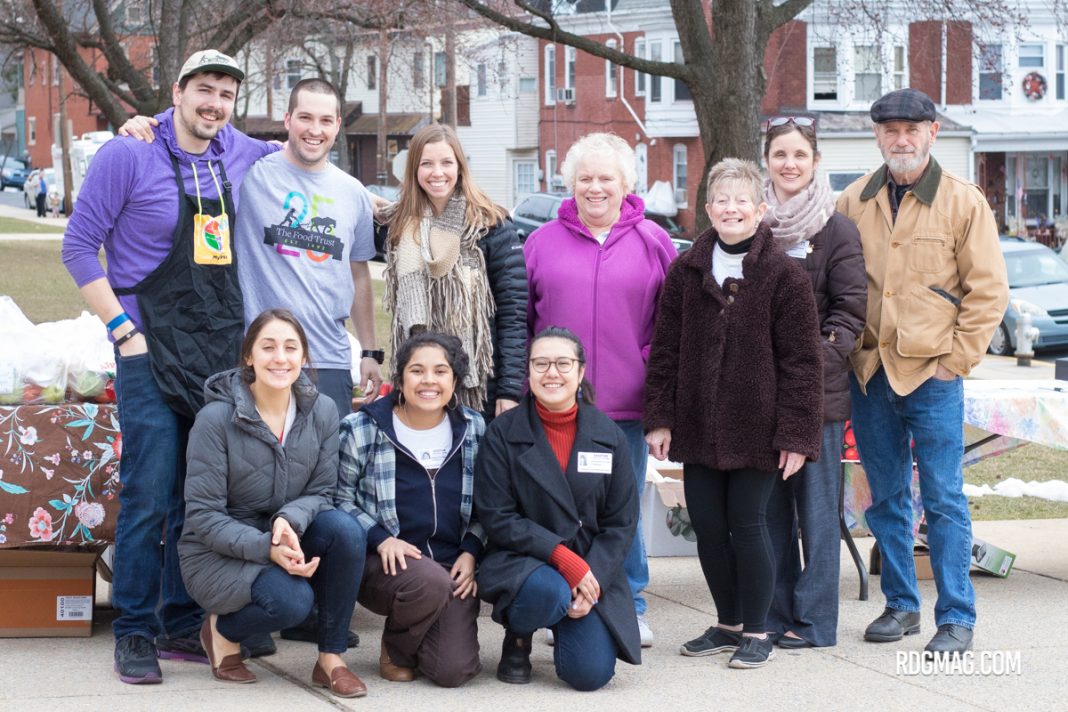 Eva Delvalle stood in the courtyard of 16th and Haak Elementary School, Reading School District, waiting for her two oldest children to be dismissed, ready for the daily rush of emerging students. But this time, students emerged to find their courtyard filled with tables of produce that they had just learned about in class and were going to get to take home to their families.

Some of them joined their adults to watch a demonstration of how to prepare a slaw made with bright purple cabbage- then they got to taste-test it together. It’s a new “Farm To School” program called the Bountiful Berks Farm Stand that’s part of an effort to combine classroom education about healthy eating and nutrition with access to affordable, local, healthy food.

This pilot program is being led by The Food Trust’s Reading team as an extension of the Bountiful Berks co-op table of the Penn Street Market and of the Berks Farm Bucks incentive program, sponsored by the Friends of Reading Hospital. Last week students took home over 200 bags filled with locally grown apples, clementines, cabbage, carrots, onions, kohlrabi and fresh baked bread. And it’s just the beginning.

Berks Agricultural Resource Network (BARN) runs the Bountiful Berks co-op table, located at the Penn Street Market, from which residents can buy local produce and goods for a lower cost than, say, from a grocery store. This is because the co-op buys the products directly from the local farmers and vendors and can sell to the residents at a reasonable cost, “We’re changing the whole model and making it that healthy, local food is the same price or less expensive than pre- made or grocery store prices,” said Zach Hunter, a Community Nutrition Educator with The Food Trust. 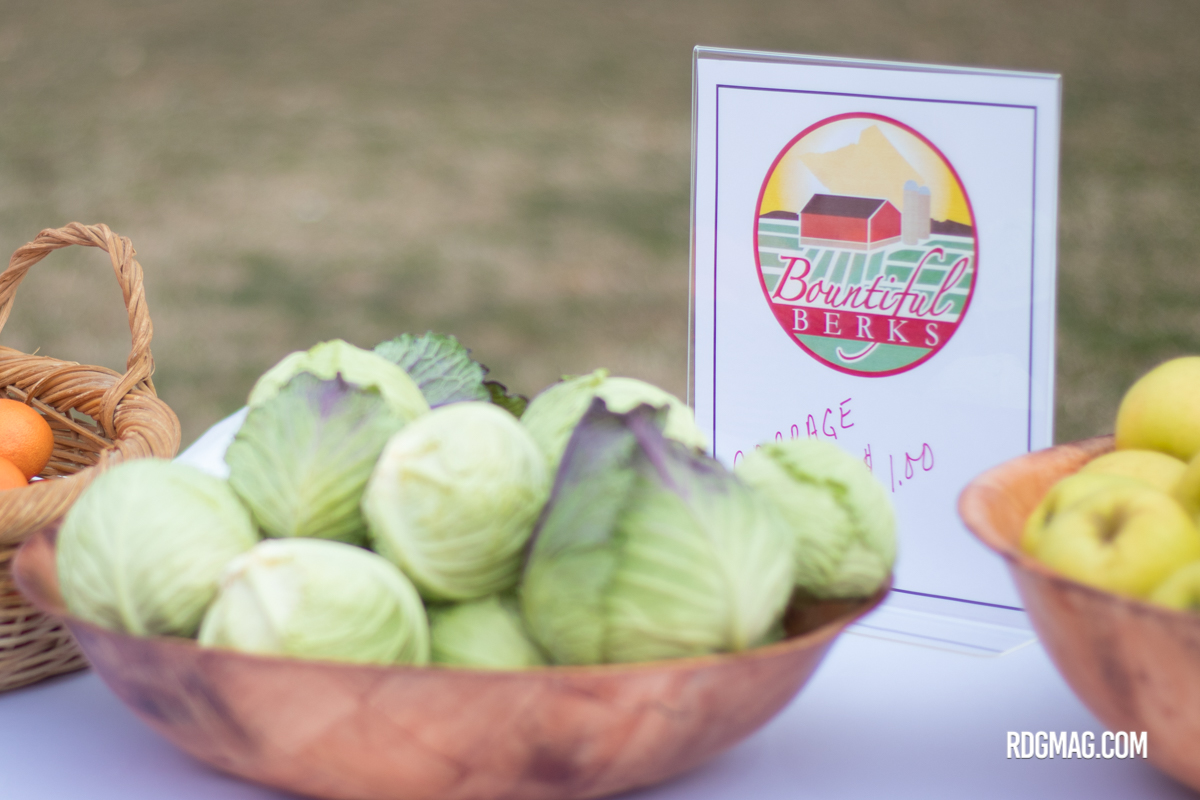 These same Bountiful Berks co-op table vendors whose goods you saw at the Penn Street Market also supply the food and produce for this Farm To School pilot: 16th and Haak students receive produce from Weaver’s Orchards and Oak Nut Farm and fresh baked bread from Tropical Bakery.

This is made possible by grant funding from BCAP and through major sponsorship of the Friends of Reading Hospital for the Berks Farm Bucks Program, originally designed for use at the Penn Street Market and adopted for this pilot.

“We all sat down to figure out how to make the Bountiful Berks Farm Stand model fit the schools better,” Hunter explained. So, Food Trust team members teach students in their classrooms and later, at dismissal, students receive a token that they use to ‘shop’ for this produce (instead of participating in a lesson on the sidewalk at the market and then immediately receiving the token).

The program will give students and adults access to fresh food for a longer period than the market’s season of June-September, “The vision is to extend the market past the market season. That’s been a vision for all of us for a long time,” said Hunter.

The Food Trust team teaches at schools throughout the district and hopes that those lessons, and this pilot, will bring even more students and their families to the market come June. And, it’s bringing the market to those students and families who aren’t in the downtown, or who can’t make the market’s weekday time frame, “The Farm To School Bountiful Berks Farm Stand brings the market and its produce to another part of the city,” said Alex Roche, an Adult Nutrition Educator with The Food Trust.

City Councilwoman Lucine Sihelnik, former Penn Street Market Manager and current BARN President, led the creation of the Berks Farm Bucks program a few seasons ago and it’s been growing since. Hunter believes that the pilot’s use of the token program will create student and family buy-in and excitement about healthy food. In the future, the program will continue its farm stand model where the fresh food and produce will be available for purchase for affordable prices. And, just like at the Penn Street Market, purchasers will be able to use Supplemental Nutrition Assistance Program (SNAP), thanks to BARN serving as the SNAP host, making it even more accessible to community members.

Buy-in from the families isn’t the only key to the program’s success—buy in from local vendors is crucial, BARN member and volunteer Sandy Witman explained. She uses her decades of professional experience in the food business and her connections to local vendors to procure the produce and food that students take home. Because of her efforts, vendors provide quality fresh food at a reasonable prices and are willing to be flexible to fit into the program’s criteria.

“A lot of [this project’s success] comes back to Sandy’s relationship with the vendors,” said Roche.

The Bountiful Berks Farm Stand creates a value chain, he explained. In return, vendors are selling their goods in a new marketplace that they may not otherwise have had the ability to staff and are being promoted through the Farm To School program.

“Bountiful Berks is the identity of what we’re working on at BARN to promote agriculture-related business,” added Witman.

Roche, who was part of the Penn Street Market team that piloted Berks Farm Bucks, and worked together with Ms. Witman on the piloting of Bountiful Berks, feels excited to see this all come together. He, along with Hunter and Witman, points to the support of the school staff in making this pilot happen.

And, he recognizes that the family support they have already seen will lend to the program’s sustainability, “We’re not worried about sustainability because of the engaged parent community at 16th & Haak Elementary School…It is always nice to see the parents come out and talk to us. The kids got an education today and we know they’re taking it home, because parents learned it too. It’s cool to see so many parents want to know what’s going on in their kids’ lives.”

One parent and PTA member, Lori Henley, was at the pilot launch and supports this program completely, “The more we can get parents involved is great. I think this is totally awesome.”

And Eva, the parent waiting for her kids to be dismissed, feels excited about it, too, “I think this is great. I have a hard time getting my kids to eat healthy at home. I think maybe they’ll see the other kids trying [healthy food] here and then they’ll want to try it too.”